Copper is a base metal that has an abundant amount of uses based on its properties of malleability and conductivity. Copper ore deposits are found on every continent, and has been mined around the world for over 10,000 years.  Copper is a necessary component for many products in the modern world.

The copper industry is a major contributor to the global economy. According to The Copper Alliance, one tonne of copper brings functionality in 40 cars, powers 60,000 mobile phones, enables operations in 400 computers, and distributes electricity to 30 homes.  Important characteristics of copper include: its electrical and thermal properties, toughness and recyclability, it is non-magnetic, antimicrobial, and catalytic.  Copper is cost efficient compared to other materials with similar attributes.  The metal is a vital resource for current and future industries including electricity generation and distribution, medicine, automobiles and renewable energy.

In addition, the copper industry supports sustainable economies. According to the leader of one global mining company, the global mining industry drives almost half of the world’s gross domestic product (GDP), either on a direct basis or through the use of products that facilitate other industries. Mines create employment opportunities, support and strengthen community public transportation systems, commercial/business infrastructures, community energy demands, and enable farmers to produce more and get their products to markets.

Copper is faced with a significant supply/demand gap over the next 15 years. Over 200 copper mines that are currently in operation will reach the end of their productive life before 2035. A lack of investment in exploration, development and production capacity, in combination with the growing demand for copper due to increased electrification, is expected to put upward pressure on the price of copper.

Copper demand has been growing rapidly through the 21st century with no signs of slowing down anytime soon. Copper is used in a variety of applications, mainly because of its unique electricity conducting properties, which also makes it difficult to substitute. It will become crucial for society in the future, given the expected increase of copper-intensive low carbon energy and electrification of transport technologies. 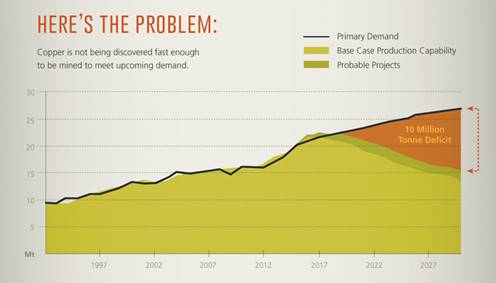 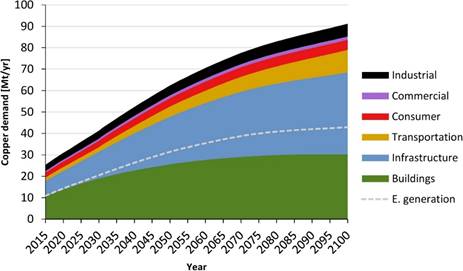 According to The Freedonia Group, global demand for copper metal (produced from refined copper and recycled scrap) is projected to advance 4.2 percent per year through 2019 to 36.0 million metric tonnes, valued at $261 billion. Improvements in building construction expenditures are expected to uplift the use of copper wire, tube, and other products in applications such as building wire and plumbing. The Freedonia Group states that increased infrastructure investment, particularly in developing countries, will continually benefit copper suppliers as updates to national power grids drive the production of wire and cable. In addition, advances in global manufacturing output are expected to bolster the use of copper metal in transportation equipment, industrial machinery, domestic appliances, and other durable goods.

Copper mine production to rise 3.7% annually 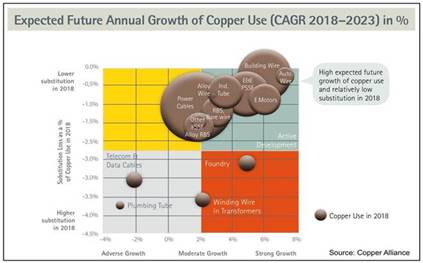 The Freedonia Group states that global copper mine production is expected to rise 3.7 percent per year to 22.6 million metric tonnes in 2019. Rapid annual increases are projected for countries such as Canada, Mexico, and Zambia, where ongoing development of copper projects will propel gains. According to The Freedonia Group, in Central and South America -- the leading regional supplier of copper ore and concentrates -- Peru is projected to post robust gains in copper mine output. Production of copper ore and concentrates in Chile, which accounted for nearly 30 percent of global output in 2014, will rise at a more modest pace, limited by the country’s aging mines.

Sustainability. Two-thirds of the copper produced since 1900 is still being used. Few other resources can match that figure, and as environmental sustainability rises to the top of the global agenda, it makes sense that manufacturers will want to be seen as agents of positive change.Copper’s recyclability not only mitigates pollution caused by producing materials such as wood and plastic, but it’s also crucial to the recycling of minerals such as silver, gold, and nickel. Every year, 8.5 million tonnes of copper are recycled.

Electric vehicles. According to a report commissioned by the International Copper Association (ICA) for IDTechEx, the number of roadworthy electric and hybrid vehicles is expected to reach 27 million by 2027. Compared to the internal combustion engine, battery-powered vehicles require approximately more than 130 pounds of copper. So, all of those electric and hybrid vehicles add up to 600,000 tons of additional copper demand by 2027.

Global electrification. According to a 2017 study by the International Energy Agency (IEA), sectors previously confined to fossil fuels are becoming increasingly electrified. The result is millions of new appliances, air conditioners, refrigerators, and vehicles in need of power. Much of that power will be carried and distributed by copper. Including all of the global request for renewable energy, this demand will only surge further for wind farms and solar energy systems.