Vancouver, BC –Rockridge Resources Ltd. (TSX-V: ROCK) (“Rockridge”) (the “Company”) has entered into an Option Agreement (the “Agreement”) with Eagle Plains Resources Ltd. (TSX-V: EPL) to acquire a 100% interest in a property that covers the majority of the historic Knife Lake Cu-Co-Zn-Ag VMS deposit. The contiguous claims total approximately 85,196 hectares and are located approximately 50 km northwest of Sandy Bay, Saskatchewan (the “Knife Lake Project” or “Property”). 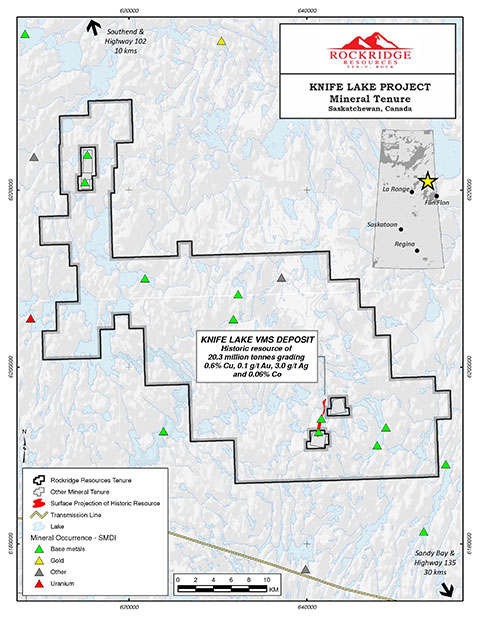 Rockridge’s President and CEO, Jordan Trimble commented: “This is a significant milestone for Rockridge as we look to position the Company as a go-to copper and battery metal exploration and development company. The Knife Lake Project is located in a top mining jurisdiction, has seen extensive exploration and drilling, and boasts a near-surface historical resource which is open along strike and at depth. There is robust discovery potential in and around the deposit as well as on regional targets on the property. Worth noting is that most of the historic exploration was carried out in the 90’s and ceased due to low metal prices. Rockridge is planning for a winter drill program to commence early in 2019 as we look to unlock value at the project with a new look at the exploration and drilling going forward.”

The Knife Lake Project is interpreted to be a remobilized VMS deposit. The stratabound mineralized zone is approximately 15 m thick and contains copper, silver, zinc and cobalt mineralization which dips 30° to 45° eastward over a strike-length of 4,500 m, with an average horizontal width of approximately 300 m. Over 400 diamond drill-holes have been completed in and around the current property boundaries, with much of the drill core stored under cover and in very good condition. 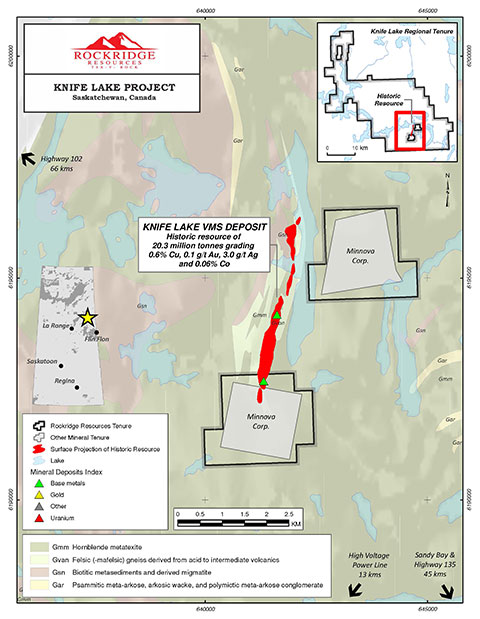 The deposit is hosted by felsic to intermediate volcanic and volcaniclastic rocks which have been metamorphosed to upper amphibolite facies. The deposit is typical of VMS mineralogy which has been significantly modified and partially remobilized during the emplacement of granitic rocks. The mineralization straddles the boundary between two rock units and occurs on both limbs of an overturned  fold.

Hudson Bay Exploration and Development Company Ltd. later carried out a regional Airborne EM geophysical survey in the Knife Lake – Scimitar Lake area, followed up by geological mapping, prospecting, ground geophysics and diamond drilling. The property was subsequently optioned to Copperquest Incorporated in 1989, who carried out further geophysical and geochemical surveys and optioned the property to Leader Mining International in 1996. Between 1996 and 2001, Leader flew various airborne geophysical surveys in the area, including electromagnetic (“EM”), magnetic, and gravity surveys. This was followed up with stripping and trenching of the outcropping deposit area. Ground TEM, magnetic, ground IP/Resistivity and VLF-EM surveys were completed over and adjacent to the main deposit area.

Between 1996 and 1998, Leader completed 315 diamond drill holes, outlining a broad zone of mineralization occurring at less than 100 meters depth (AF 63M-0006, Report 10). Late in 1998, Leader published a historical estimate for the deposit, reporting a drill-indicated resource of 20.3 million tonnes grading 0.6% Cu, 0.1 g/t Au, 3.0 g/t Ag, 0.06% Co and 0.11% Zn. Within the historical estimate there is a higher grade zone containing 11.0 million tonnes grading 0.95% Cu. (SMDI 0406). Rockridge Resources’ management considers these estimates to be historical in nature and cautions that a Qualified Person has not done sufficient work to classify the historical estimates as current mineral resources or mineral reserves in accordance with National Instrument 43-101.  These estimates do not comply with current definitions prescribed by National Instrument 43-101 or the Canadian Institute of Mining, and are disclosed only as indications of the presence of mineralization and are considered a target estimate to help guide additional work.  The historical models and data sets used to prepare these historical estimates are not available to Rockridge, nor are any more recent resource estimates or drill information on the Property.

The Knife Lake Project has a drill permit in place and the Company is planning for an initial diamond drill program in early 2019. Details of the drill program are forthcoming.

Under the terms of the Agreement, which is subject to TSX Venture Exchange (the “Exchange”) approval, Rockridge may acquire a 100% interest in the Knife Lake Project by making cash payments to Eagle Plains Resources totalling CDN $150,000, issue up to 5,250,000 common shares of Rockridge, and incur exploration expenditures of up to CDN $3,250,000, over a four year period as follows:

In connection with the Option Agreement, the Company announces that it has arranged a non-brokered private placement of up to 5,000,000 units (each a “Unit”) at a price of $0.20 per Unit to raise gross proceeds of up to $1,000,000. Each Unit will consist of one common share and one warrant exercisable to purchase one additional common share at a price of $0.35 each for a period of five (5) years from the date of issuance.

The technical information in this news release has been prepared in accordance with the Canadian regulatory requirements set out in National Instrument 43-101 and reviewed and approved by Richard Kusmirski, P.Geo., M.Sc., a Director of Rockridge and a Qualified Person.

Rockridge is a new publicly listed mineral exploration company focused on the acquisition, exploration and development of mineral resource properties in North America. The Company has 12.7 million shares issued and outstanding.

NEITHER THE TSX VENTURE EXCHANGE NOR ITS REGULATION SERVICES PROVIDER ACCEPTS RESPONSIBILITY FOR THE ADEQUACY OR ACCURACY OF THE CONTENT OF THIS NEWS RELEASE.

This news release includes certain statements that constitute “forward-looking information” within the meaning of applicable securities law, including without limitation, statements that address the Property, obtaining a permit, comments regarding the timing and content of upcoming work programs, timing of future exploration and development, acquisition of other mineral properties, other statements relating to the financial and business prospects of the Company. Forward-looking statements address future events and conditions and are necessarily based upon a number of estimates and assumptions. These statements relate to analyses and other information that are based on forecasts of future results, estimates of amounts not yet determinable and assumptions of management. Any statements that express or involve discussions with respect to predictions, expectations, beliefs, plans, projections, objectives, assumptions or future events or performance (often, but not always, using words or phrases such as “expects” or “does not expect”, “is expected”, “anticipates” or “does not anticipate”, “plans”, “estimates” or “intends”, or stating that certain actions, events or results “may”, “could”, “would”, “might” or “will” be taken, occur or be achieved), and variations of such words, and similar expressions are not statements of historical fact and may be forward-looking statements. Forward-looking statement are necessarily based upon a number of factors that, if untrue, could cause the actual results, performances or achievements of the Company to be materially different from future results, performances or achievements express or implied by such statements. Such statements and information are based on numerous assumptions regarding present and future business strategies and the environment in which the Company will operate in the future, including the price of gold and other metals, anticipated costs and the ability to achieve goals. While such estimates and assumptions are considered reasonable by the management of the Company, they are inherently subject to significant business, economic, competitive and regulatory uncertainties and risks.

There can be no assurance that planned exploration will be completed as proposed or at all, or that economic resources will be discovered or developed at the Property; and there can be no assurance that the Company will acquire other mineral properties. Accordingly, actual results may differ materially from those currently anticipated in such statements. Factors that could cause actual results to differ materially from those in forward looking statements include, but are not limited to, continued availability of capital and financing and general economic, market or business conditions, market prices, exploration and development successes or failures, the loss of key directors, employees, advisors or consultants and fees charged by service providers. Investors are cautioned that forward-looking statements are not guarantees of future performance or events and, accordingly are cautioned not to put undue reliance on forward-looking statements due to the inherent uncertainty of such statements. The forward-looking statements included in this news release are made as of the date hereof and the Company disclaims any intention or obligation to update or revise any forward-looking statements, whether as a result of new information, future events or otherwise, except as expressly required by applicable securities legislation.