The Knife Lake Project is interpreted to be a remobilized VMS deposit. The stratabound mineralized zone is approximately 15 m thick and contains copper, silver, zinc and cobalt mineralization which dips 30° to 45° eastward over a strike-length of ~4,000 m, with an average horizontal width of approximately 300 m. Over 400 diamond drill-holes have been completed in and around the current property boundaries, with much of the drill core stored undercover and in very good condition. 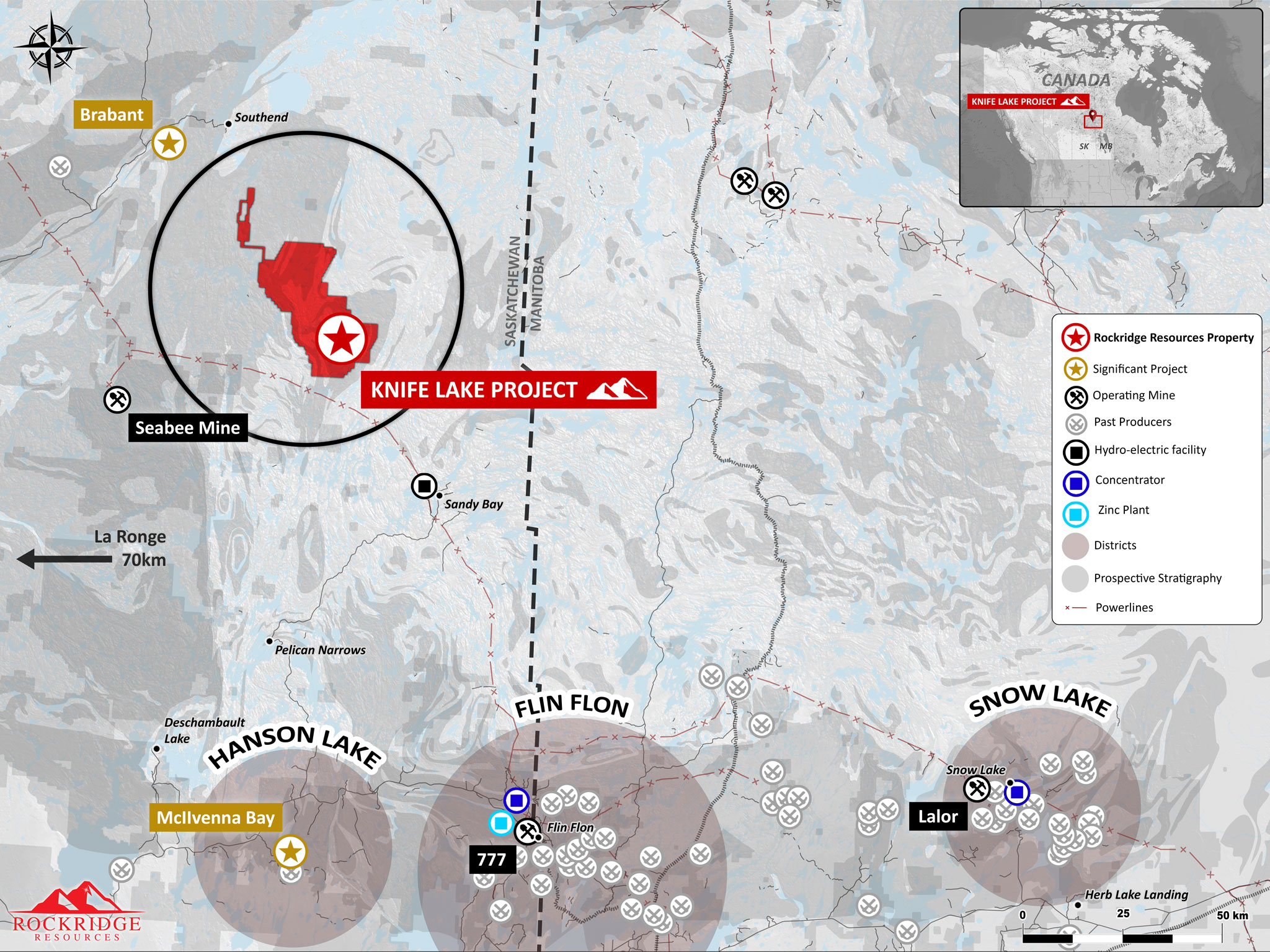 2003: Leader Mining issued Cease Trade Order which remained in place for over 3 years

2018: Eagle Plains, a prospect generator, stakes area of expired lease and acquires additional tenure as well as access to existing drill-core; seeks to farm out the property as part of business model

2018-2019: Eagle Plains and Rockridge enter into an option to acquire 100% interest of large, 31,689 ha, property package and TerraLogic contracted to carry out the exploration programs going forward 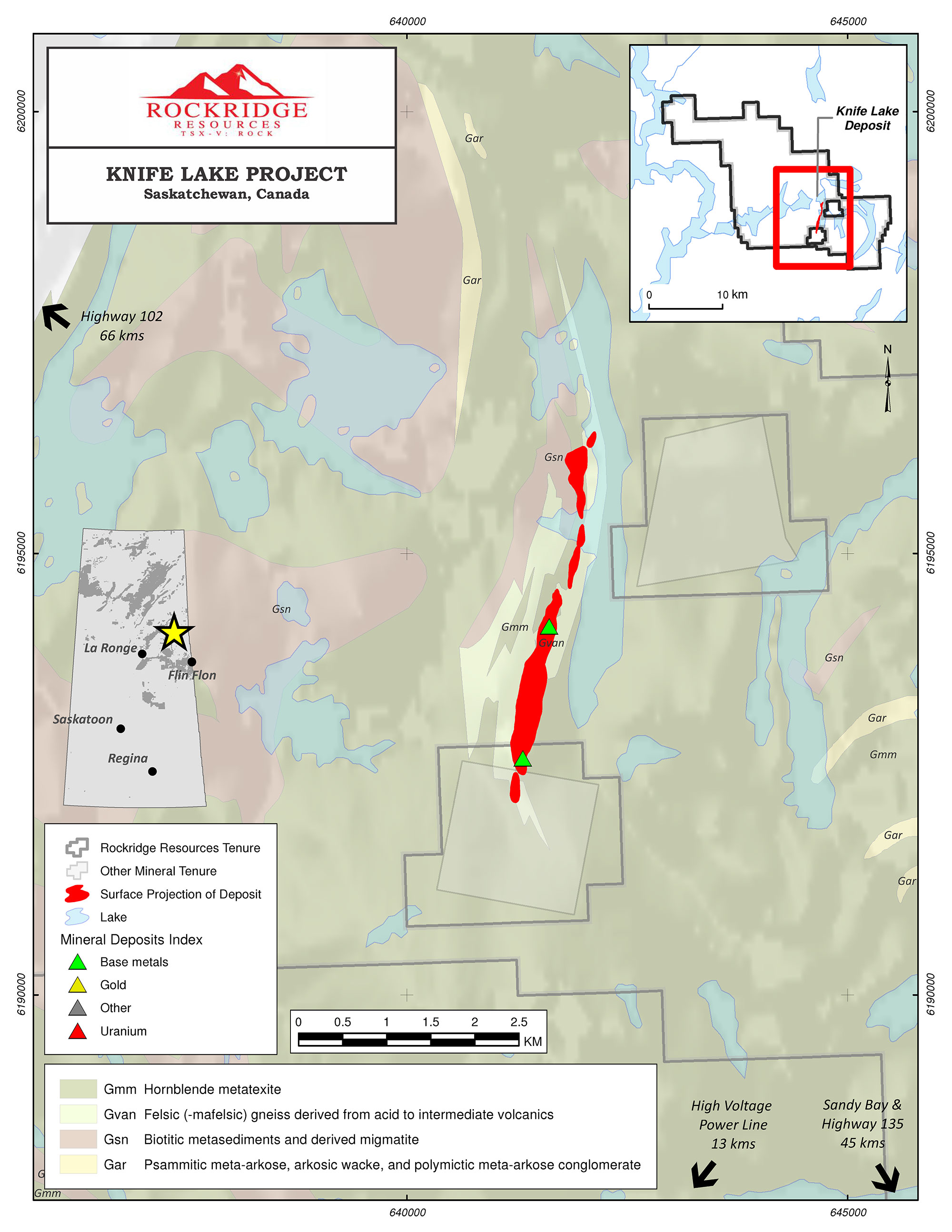 The Knife Lake deposit is hosted by felsic to intermediate volcanic and volcaniclastic rocks which have been metamorphosed to upper amphibolite facies. The deposit is typical of VMS mineralogy which has been significantly modified and partially remobilized during the emplacement of granitic rocks. The mineralization straddles the boundary between two rock units and occurs on both limbs of an overturned fold.

Hudson Bay Exploration and Development Company Ltd. later carried out a regional Airborne EM geophysical survey in the Knife Lake – Scimitar Lake area followed up by geological mapping, prospecting, ground geophysics, and diamond drilling. The property was subsequently optioned to Copperquest Incorporated in 1989, who carried out further geophysical and geochemical surveys and optioned the property to Leader Mining International in 1996. Between 1996 and 2001, Leader flew various airborne geophysical surveys in the area, including electromagnetic (“EM”), magnetic, and gravity surveys. This was followed up with stripping and trenching of the outcropping deposit area. Ground TEM, magnetic, ground IP/Resistivity and VLF-EM surveys were completed over and adjacent to the main deposit area.

Between 1996 and 1998, Leader completed 315 diamond drill holes, outlining a broad zone of mineralization occurring at less than 100 meters depth (AF 63M-0006, Report 10). Late in 1998, Leader published a historical estimate for the deposit. Within the historical estimate, there is a higher grade near surface zone. (SMDI 0406).

The tables below summarize the sensitivity of the Knife Lake mineral resource estimate to cutoff grade, with the base case cutoff of 0.40% copper equivalent (CuEq) highlighted.  The base case CuEq cutoff is equal to an NSR cutoff of approximately CDN $30/tonne and is based on processing costs of comparable deposits.

There are no known current environmental, permitting, legal, title, taxation, socio-economic, marketing, or political factors that could materially affect the mineral resource estimate. Factors that may affect the estimate are typical of any deposit and include; metal price assumptions, changes in interpretations of mineralization, metallurgical recovery assumptions, delays or other issues in reaching agreements with local or regulatory authorities and stakeholders, and changes in land tenure requirements or in permitting requirements.

Scroll to the right to see the table data.

Scroll to the right to see the table data.

The mineral resources have been estimated in conformity with generally accepted CIM “Estimation of Mineral Resource and Mineral Reserves Best Practices” guidelines (CIM, 2014) and are reported in accordance with the Canadian Securities Administrators’ National Instrument 43-101 (CSA, 2018). Mineral resources are not mineral reserves and do not have demonstrated economic viability. There is no certainty that all or any part of the mineral resource will be converted into mineral reserves. The NI 43-101 resource estimate has an effective date of June 12, 2019.

The resource for the Knife Lake deposit has been confined within an open pit shape to define “reasonable prospects of eventual economic extraction” using the following input parameters:

Interpolation for all metals has been done using 4 passes with anisotropic distances based on variography for 5 domains that have been created based on the mineralization. Ordinary kriging (OK) has been used as the final grades for all metals except Au which has final grades based on inverse distance squared (ID2) for better validation of the model. Outlier restriction of high grades for each metal and domain have been applied where deemed necessary based on cumulative probability plots (CPP) and percent of metal removed.

Interpolation parameters are summarized in the table below:

Classification to Indicated is based on a continuous volume of modelled blocks in the central area of the deposit with the average distance to at least 2 drill holes of up to 35m. All other interpolated blocks are considered Inferred with distances to drill holes as summarized in the above table.

Rockridge implemented QA/QC protocols including insertion of duplicate, blank, and standard samples in all 2019 drill holes.  Check samples of 25 selected intervals from Leader Mining drilling in the 1990s were sent to ALS in North Vancouver, BC, Canada, for analysis. The historic samples were not consistently assayed for cobalt, lead and zinc so those comparisons are limited. Check assays returned acceptable results for all samples except one.

All lab internal standards and duplicates were within acceptable values. Core from Rockridge’s 2019 diamond drilling program was logged and sampled on site by staff of Terralogic Exploration Inc.  Whole core was sawn in half and a total of 609 samples were sealed and shipped directly to ALS Environmental in Saskatoon for internal transportation to ALS Geochemistry in North Vancouver for analysis. 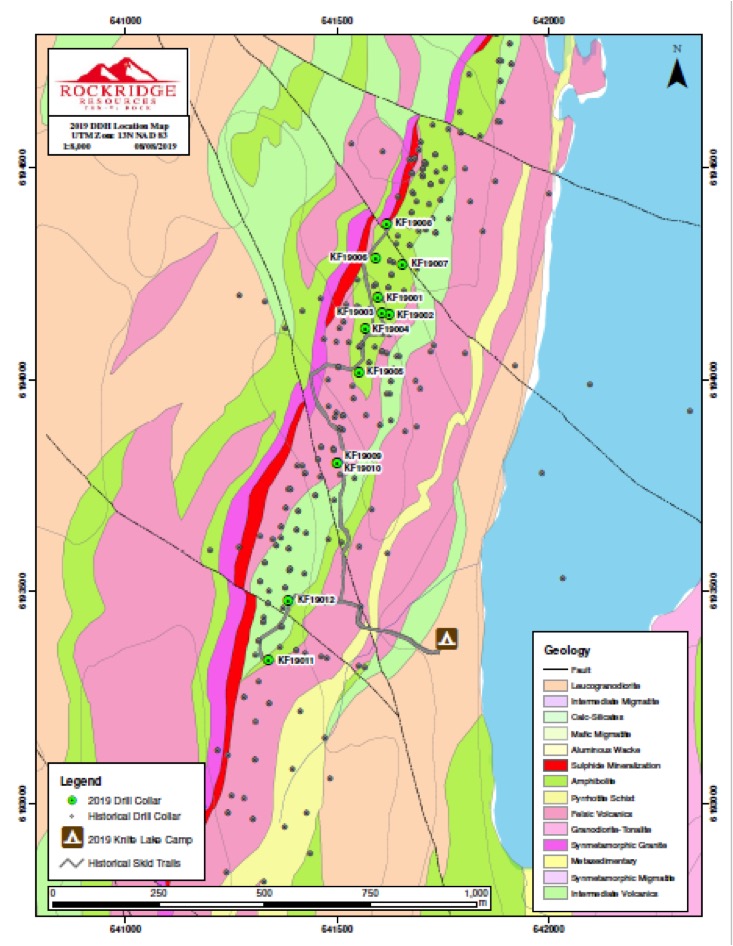 Below is a three-dimensional view of the Knife Lake block model illustrating the copper equivalent grade for the entire length of the deposit within Rockridge’s claims. The view is looking northwest with a grid size of 200m x 200m to indicate the scale. 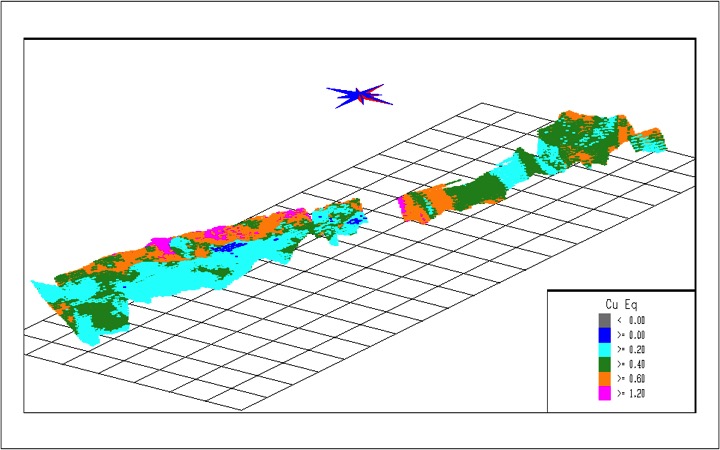 Stephen Kenwood, P.Geo., an independent qualified person visited the Knife Lake Property on May 15, 2018, and March 22, 2019, and is responsible for the geology and QAQC.